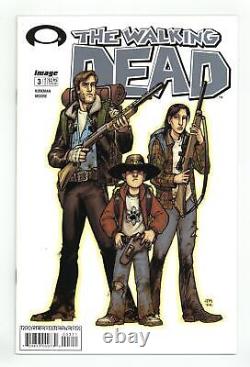 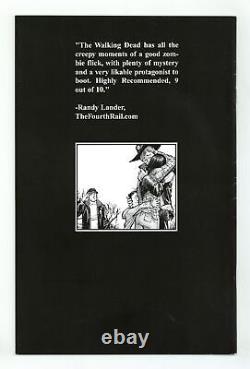 Key Comics & First Appearances. Walking Dead #3 FN/VF 7.0 2003. This is a mid grade item. It will have a few minor defects and will generally appear to be in "slightly used" but not "roughly used" condition. Most comics, magazines, and books published in the past 30 years that have been read but carefully handled and stored will fall in this grade range. Allowed defects for this grade include: minor corner wear (bends and blunting), a light accumulation of spine wear that may include color-breaking stresses, a light accumulation of dents, and bends or folds less than one quarter inch in length. Some color breaking is allowed in a bend or fold in this grade range. (W) Robert Kirkman (A) Tony Moore BW 32pp Ongoing Monthly Series In stores the week of December 3rd. THE CONCEPT: How many hours are in a day when you don't spend half of them watching television? When is that last time any of us REALLY worked to get something that we wanted? How long has it been since any of us really NEEDED something that we WANTED? The world we knew is gone. The world of commerce and frivolous necessity has been replaced by a world of survival and responsibility. An epidemic of apocalyptic proportions has swept the globe, causing the dead to rise and feed on the living. In a world ruled by the dead, we are forced to finally begin living. THIS ISSUE: Rick Grimes' horrific adventure continues. Reunited with his family, his focus shifts from survival to protection. It's one thing to know that you have to watch your back every second of every day. It's another thing entirely to have to worry about losing your family in the blink of an eye.

Rick's life has changed dramatically in the last couple months and so far, he's learned to deal with it... But is he finally starting to crack? From the guys behind BATTLE POPE and BRIT comes something COMPLETELY different. The item images for this listing are not stock images, they show the exact item offered.

We take pride in our accurate, consistent grading. You can be confident in receiving a well-graded comic when ordering from us. We understand that condition is important to collectors. Orders are processed each weekday morning, so be sure to submit all orders quickly if you want us to combine them.

This item is in the category "Collectibles\Comic Books & Memorabilia\Comics\Comics & Graphic Novels". The seller is "mycomicshop" and is located in this country: US. This item can be shipped worldwide.