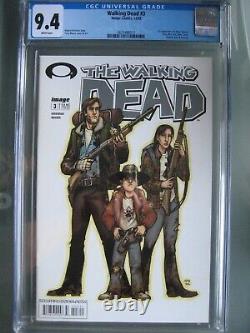 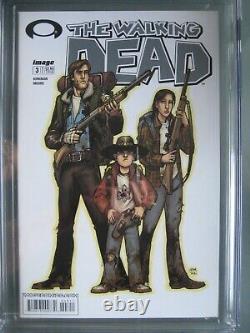 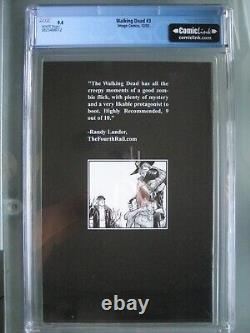 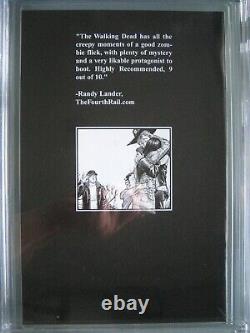 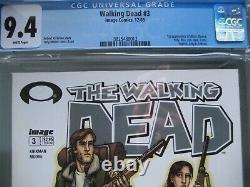 Robert Kirkman (Story) Tony Moore (Art & Cover). Shane comes up to greet Rick. Rick is happy to see him and Lori says that Shane helped her and Carl escape to Atlanta. Shane then shows Rick around the camp and introduces everyone.

The young man that helped Rick in the city is Glenn. There is Allen and Donna and their twin boys, Ben and Billy, Dale (who owns the RV), Jim, Carol and her daughter Sophia, and sisters Amy and Andrea.

Everyone leaves Rick and Lori to be reacquainted. That night, Rick and Lori talk. Lori apologizes for leaving Rick at the hospital. He forgives her saying that he was happy that she was doing what was best for Carl. Rick asks if Dale is enough to keep watch.

Lori begins explaining the situation of how very few zombies have come near them. Rick, finally thinking about the situation they are all in, admits that he is scared.

The next morning, Rick wakes up and meets Shane as he comes out of his tent. Shane mentions that Dale's camper has a working shower and he wants to go hunting with Rick after he takes one.

Rick takes his shower and upon exiting, meets Dale. Dale tells Rick that he shouldn't trust Shane. He says Shane is a good man and helps out around the camp, but Shane isn't happy that Rick is back because he has had his eye on Lori. Rick appreciates Dale's concern, but reassures him that Shane was only keeping Lori and Carl safe. Rick laughs it off as he leaves the camper and heads off with Shane to hunt.

Meanwhile, Lori, Carol, and Donna go down to a stream to wash clothes. The others stay at camp to watch the kids. As Rick and Shane are hunting, Shane mentions to Rick that he is glad that he brought some guns. So far they only had Shane's side arm and Dales' rifle. It's been hard to hunt and they have only been eating what Glenn can get from his trips into the city. They hear a rustle and come across a zombie, named "Front", eating a deer. They note that it is oblivious to them standing there. They question whether it would be safe to eat the deer. Back at the stream, Lori tells the story of how she met Rick to Carol and Donna. They finish the washing and head back to the camp. Just before they get to the camp, Allen, who is keeping watch atop the camper, sees a walker right behind the women and yells for them to look out. Allen tries to shoot the walker, but Donna is in the way. Suddenly, Dale, who was out cutting firewood, comes up from behind and decapitates the zombie. They are relieved until they notice that the head of the walker is still sputtering and moaning. They are shocked to see it still alive. Back at Rick and Shane's position, the two are debating taking the deer when the walker finally notices them. It starts to stand up but Rick impales it in the head with his axe. They suddenly hear a gunshot and run back to the camp.

They get back to see that Allen has shot the head of the walker that attacked. Allen tells Dale that they should get the body into the woods and away from the camp. Rick immediately runs up to Lori and consoles her as Shane looks at the couple with jealousy. This item is in the category "Collectibles\Comic Books & Memorabilia\Comics\Comics & Graphic Novels".

The seller is "madeofmiracles925" and is located in this country: US. This item can be shipped worldwide.