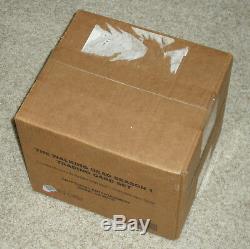 This is a super rare item - boxes are hard enough to find let alone a sealed case. I bought this directly from Cryptozoic's website back in 2011 and is the only case I have left. Autograph and one wardrobe card per box!

Configuration: 24 packs per box. Configuration: 12 boxes per case. Humans are the outsiders in the land of the walkers. In the AMC television series based on the Robert Kirkman comic book series, Rick Grimes leads a band of humans trying to survive in Atlanta, Georgia. Everything is scarce in this world except for zombies; there are plenty of zombies.

The series is as much about the nature of humanity as it is about survival. Each card takes a piece of the human experience-brotherhood, teamwork, mourning- to give the collector individual snapshots of this harrowing tale. The first release in the trading card series covers the events of the first season and features a 72 card base set along with feature autographs and memorabilia from the popular show.

Autographs from prominent cast members randomly inserted in packs. Chase Sets : Charachter Biographies (2:24 packs) features information about some of the characters, and Behind the Scenes (2:24 packs) shows a little of the process to make the show in Atlanta, Georgia.

This item is in the category "Collectibles\Non-Sport Trading Cards\Other Non-Sport Card Merch". The seller is "snoopy351" and is located in Indianapolis. This item can be shipped worldwide.